One graceful Saturday as I went downtown to do shopping using a subway, I was left open-mouthed when my neighbors changed seats after noticing I was black. As if that was not enough, I met people who set off into pushing panic buttons after looking at me, and babies who cried for help. Ha! Ha! The first time this happened to me, I nearly shouted at people to let them know I am as human as them but thank God for the language barrier, my energy was saved.

At a former job, while we were busy executing our pruning talent, a friend told us how she hates our wife’s boss because the lady hates blacks and every time they crossed paths it was like a dog passing near a cat.

I have shared the same space with people who shout at each other as a media of communication. Surprisingly one time I overheard them say, “If you are going through any trauma, do whatever it takes to be okay even if it means shouting at anyone near you”.

One wise person once stated that tea would pour out if you knock a teacup because tea is stored inside.

I had bad days when I developed mood swings around my people, and shockingly, some wore expressions of regret pleading if they did something wrong to me, yet my inner battles determined my behavior.

What I have learned, most of the tension and relationship problems in our lives don’t have to do with the other person. Truthfully, the tension often comes from within us; it is much easier to blame our emotions on someone else’s actions than to guard our hearts and own our reactions.

I am learning to be powerful, notwithstanding people’s reactions. Imagine if I open my heart to release emotions, whether good or bad depending on how the Koreans regard blacks! Some are open-minded and warm while others know blacks for bad things.

When a person did something good or bad to me on my life journey to becoming, I would wonder what good or bad I did to them. At least I now know better, instead of flexing back to the bad I have learnt to be kind or stay away from such people.

Let us learn to hold out to peoples’ ignorance, trauma, and any other inside battles but rather be kind or stay away.

Above all else, guard your heart, for everything you do flows from it. Proverbs 4; 23.

This queen keeps getting better. View all posts by SageViv

9 thoughts on “Guard Your Heart” 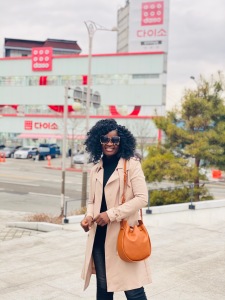 A girl after God`s own heart who enjoys hearty conversations, a loud laugh, good reads, soft music and good food.

I am enchanted when I help people around me discover, accept and walk in their true, raw, and vulnerable self.